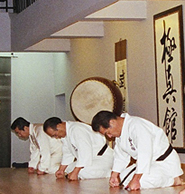 In the decade following the death of Mas Oyama, 12 million practitioners International Karate Organization, that this had created, They divided into several smaller organizations.

In 2002, Hatsuo Royama, one of the students was the Oyama Dojo, along with many friends, separated from the then largest group of Grand Master followers, the KyokushinKAIKAN, and created an organization named Kyokushin-Kan. Hatsuo Royama had fought nearly a decade, supporting the young leader KyokushinkAIKAN – 15 years younger than him – but finally realized that the organization did not follow the path that had approved his Master, Mas Oyama. The Great Teacher constantly repeated that the core Kyokushin Karate was the Spirit of Budo, covering the appropriate behavior, the courtesy, the spirit of greeting among the karateka and goodwill towards others and, clear, dexterity in the fight. Hatsuo Royama realizing that the original successor of Mas Oyama had replaced this extremely important aspect of the organization by the love of money and the “Spirit of Budo” had been replaced by “spirit of business”. Human relations, friendship, The concept Who-Senpai, that for Mas Oyama were so important, had been hidden under the shadow of money and the power of desire.

Furthermore, Royama concluded that the disciples of the new leaders Kyokushin had less and less skill and value. While living Mas Oyama, the Japanese public had no doubt at all that the Kyokushin Karate was the best and the strongest in the world. Royama and others knew that the reason remained at the peak was the emphasis that Mas Oyama placed on the real-world application of karate techniques. Oyama created a style of competition "Full Contact" to popularize Karate, while recognizing at all times the difference with true essence of Karate as a martial art.

Tournaments Kyokushin are excellent for developing a spirit that has the karateka of above all win the fight, but it is never of life or death fighting. For example, Competition punches are not allowed in the face. The reason fighters Kyokushin came to be the strongest, under the direction of Mas Oyama, is that trained for application in real life, but then struggled in the championships, less dangerous due to the established rules. However, in 2002, Shihan Royama and others realized that the leaders of the organization had abandoned Mas Oyama's emphasis that the Grand Master had put the application in the real world and that, lowering standards, granted more importance to tournaments. For them it was the only thing that generated money and fame.

It was quick to Hatsuo Royama and other instructors Kyokushin Karate, como Shihan Tsuyoshi Hiroshige, who holds the record for training more Japanese and world champions than any other instructor, realized that the Kyokushin had ceased to be the best Karate and the strongest in the world.

O Shihan Royama, Shihan Hiroshige and many other followers broke with KyokushinKAIKAN and founded the rival Kyokushin-kan, with the intention that the Kyokushin Karate again reach the estimated levels that had benefited during the life of Mas Oyama, renewing the emphasis on spiritual principles of Kyokushin and rejecting the love of money, that could generate the fighting.

One of the first measures taken by Hatsuo Royama to form the Kyokushin-Kan was the restoration of Fundacion Kyokushin Shogakukai Mas Oyama, as indicated the will of the Grand Master. This Foundation, non-profit, had been created in Japan, with the mission to strengthen the body and the mind of the young Japanese and nurture ideas may lead to world peace. The purpose of creating this organization, recognized by the government, was to ensure that money and greed would not interfere in the way of Kyokushin.

The will of Mas Oyama clearly indicated that his followers should re-establish the foundation, he had created. For this reason and also by the failure of young leaders KyokushinKAIKAN, Royama and others turned away from them to follow the path indicated by your teacher, Mas Oyama. It should be added that most of the members of the board (composed of trusted advisors of Mas Oyama when he was alive), the Kyokushin Shogakukai Foundation, after taking their positions, supported the Kyokushin-Kan of Royama. A little over 3 years which was founded Kyokushin-Kan and for more than 6000 Japanese karate, in its 50 affiliates, with multiple dojos, each.

Furthermore, creating been up numerous branches worldwide (See list of member countries). Constantly receiving postal and email, to apply to join. And in these 3 year old, the Kyokushin-Kan has annually sponsored national championships, in April or May for children and young people and adults, by category pesos, and in November for adults of all categories, culminating in Tokyo, EM Saitama. The First World Championship Open Kyokushin-Kan was performed with stunning success in Moscow, in September 2005.