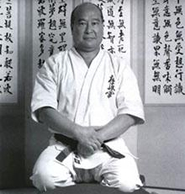 O Sosai (Grand Master) Masutatsu Oyama was born in Korea in 1923, becoming the founder of the most famous style of Karate in Japan and the most widespread worldwide. Since the 9 years old, Mas Oyama learned Kempo in Manchuria and soon trained for several years Judo and Boxing. All this led to the practice of Okinawa Karate, which will eventually serve as a springboard for creating your own style, the Kyokushin, which means "the ultimate truth". When Mas Oyama did 20 year old, had received his fourth Dan Karate of Okinawa and, after continuous study and practice of Judo, also reached the fourth Dan in this martial art.

Oyama thought that through a hard and rigorous training could cause their hands were as hard as a hammer. Then began to practice in order from boards (origin of the current “tameshiwari”), bricks and stones with their hands. The largest contribution to the Japanese Karate was probably the introduction and popularization of full contact fighting Karate (the “full-contact”).

When he won the biggest tournament Japan Cup, sponsored by Shotokan Karate Okinawa, was, repeatedly, penalized for lutar too hard, and resulted in frequent injuries to his opponents. Perhaps it was this experience, more than others, who influenced him and led him to create the Kyokushin Karate.

After all, Mas Oyama believed that karate is a fighting art …, a martial art. Believed that if not reached the maximum, practicing until you can “break” the body of the opponent (this application, that would be used only in case of life and death), could not achieve true spiritual force Karate.

Mas Oyama, frustrated because there were people who opposed his strength and technique, grew and constantly improved. At the age of 23 years retired to the mountains with the ambition to train more hours than those who slept and remained there three years. Struck the trees, surrounding his hut, with their hands so strongly that some dried. Raised twice the weight of your body 500 times per day, meditated beneath the icy waterfalls, while lutava against the cold and isolation. When she came down from the mountains, say struck his fist a telephone pole and left their footprints in the wood marked forever. To 27 year old, convinced that Japan had no opponent, no one could reach his power and ability, Mas Oyama began his famous battles with bulls, to test their strength and make known to the world the true power of Karate. One time, filmed by a camera, fought a bull in a beach during 45 minutes; none of them gave a loser. When the bull got tired, Mas Oyama could “Courteous lhe” one of the horns with hand corner, in the form of “Suto”.

Oyama opened his first dojo in Ikebukuro, Tokyo, when he was 30 year old, he called “Oyama Dojo.” Here was where he combined all that he had learned from various styles, over the years, combined with what was achieved by itself during thousands of hours of training and fighting total contact, to finally create a new Karate style, he called Kyokushin. In 1964, opened a new Dojo, in Ikebukuro, which would be the world headquarters International Karaté Organization, KyokushinKaikan, exceeding 12 million practitioners in 133 countries, when he died.

Oyama died of lung cancer, in April 1994, leaving us as an inheritance the strongest Karate in the world.