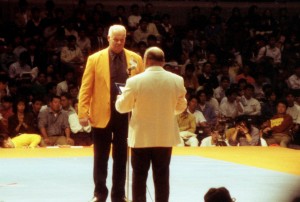 Jacques Sandulescu, “Large”, had been a personal friend of Mas Oyama and his “foreign brother”, since the early sixties, when they met for the first time in one of his trips to the US. Was a famous event in the bag of “Karate Baka Ichidai "e, sometimes, people asked: “You fought against him?” (This is the way of the strong men become good friends). The answer is a mystery, but what we can say is that Jacques – then owner of a coffee and a jazz bar, Today author and actor - trained with Sosai six hours a day, until the second obteve Dan…Sosai and gave him one of his belts. Later, Sosai gave him the sixth Dan, compatible with its status as Advisor, but Jacques never used it because he continued to train with your “old” belt.

Jacques helped Sosai to perform spectacular displays, presenting to the public the American force and the power of Karate. These images show how close they were lifelong. Jacques continues to train and to offer their advice to Kyokushin-Kan, while enjoying many friends karateka Kyokushin worldwide. 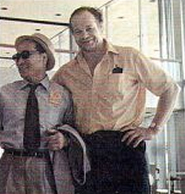 Jacques understood Sosai so well perhaps because also his life had been very hard and stamina and the desire to achieve the impossible had done triumph. Jacques became Red Army prisoner in his native Romania, in 1945, when he was 16 years old. After performing forced labor in the coal mines of Donbas (Current Ukraine) fell wounded, when the collapse of a mine and fled to prevent amputation both her legs. You can read his autobiography in English, DONBAS, in donbas.com. It adds a special epilogue about his friendship with Sosai Oyama, including more photos.