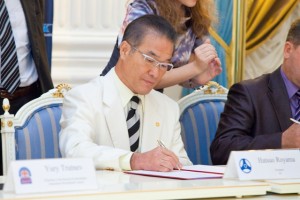 Hatsuo Royama was born in Saitama, north of Tokyo, in 1948. Inspired by the great popularity of famous fighters, Japan, came to Ikebukuro with 15 years and joined the now legendary “Oyama Dojo” Mas Oyama, which was beginning to be born Karate Kyokushin. Royama is one of the few students of Mas Oyama, Grandmaster, closely associated, since the beginning of the organization until his death, in 1994. Were 31 years under his teachings. No one of any other organization had much training time with Mas Oyama.

Royama achieved fame, for the first time, when the 25 years was crowned champion 5th Campeonato Kyokushin Japan and, years later, when they managed to win the American giant Charles Martin, measuring 30 inches more than he, do not First World Open Championship of 1975. This young prodigy of Mas Oyama came to a historic end, this First World Championship, when the split decision of the judges, that agreed to deliver the first place Katsuaki Sato, Royama getting runner-up. The next day the tournament, while several fighters had to go to the hospital for treatment of the lesions, the young Royama trained as usual.

For anyone who knows the Karate Kyokushin today it is difficult to separate your style your unstoppable and powerful kick (with the leg down). But not everyone knows that was Royama who became famous this technique. No World Championship, Japanese foreign heard screaming “Low kick! Low kick!”and, as the pronunciation of the letter “R” is similar to “The”, not to the Japanese ear formed in tongues, most of them thought listen “Ro kick! Ro kick!”. Like This, believed that aliens called this technique the short name of Royama. After all, was Royama who used this scam, which may or tacos from large blocks of ice, Charles Martin to win, in the First World Championship.